The Syrian conflict occurred due to the impact of the Arab Spring which captured the world's attention and made its people decide to migrate to neighboring countries such as Turkey, Lebanon, Jordan and others to seek protection and a sense of security. Turkey was the country with the most refugees in 2015 reaching 2.5 million people. This study uses a qualitative method with secondary data sources and uses a literature study technique with the scope 2015. The purpose of this study was to determine the involvement of the United Nations High Commissioner for Refugees (UNHCR) and the securitization of the humanitarian issue of Syrian refugees in Turkey in 2015. The results of this study indicate that the United Nations High Commissioner for Refugees (UNHCR) as an international organization under the United Nations that handles international refugees has entered to deal with the crisis that occurred in Turkey and has been involved in the securitization of humanitarian issues that occurred to Syrian refugees in Turkey in 2015. UNHCR in its efforts to handle Syrian refugees in Turkey includes resolving issues of education, health, and housing. 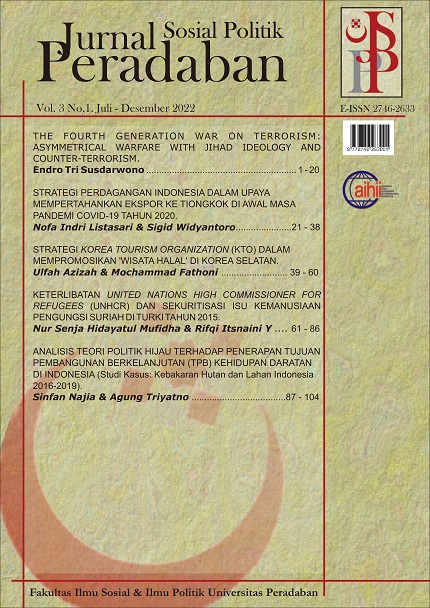